It was due apparently to a flash of inspiration of Alex from Wieden & Kennedy who together with Nokia, managed to offer a live streaming of TED talks to 60 people over three days. I found out though Lloyd Davis who extended the offer to the tuttle community and tweeted about it. I was lucky to see that tweet.

The experience was rather amazing. In this day and age the culture that we have access to is mind-boggling. 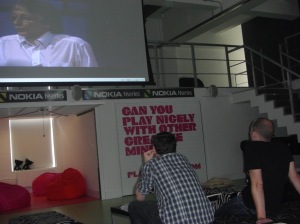 What really made the days though, aside from ongoing streams of ground-breaking thinking and being that TED talks almost always bring, was the magic combination of the following: 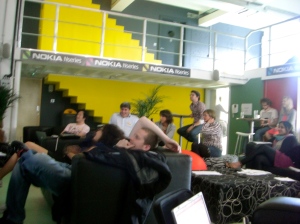 In short, Wieden & Kennedy and Nokia did this very right.

I went along on the Wednesday 22nd July and chatted for the first time in earnest to Andy Broomfield who is concerned with the user experience of interaction with technology Andy does fascinating art/technology installations which explore the human relationship with gadgets. I encountered a vibrant group of people at the gathering including some young people there with lots of energy.

@MarcSchmoeger: RT @evangineer Plants think of CO2 as a building block, like coral. There’s a US firm using the same technique to make cement #TEDLive

@Casablanca: “90% of the feature requests for Microsoft Word are already in Microsoft Word. The interface doesn’t scale” – @azaaza #TEDLive

After the event, I ended up exploring tentatively with Alex from W&K about further possibilities. What could be done after a day like this? What could harness the inspiration that comes from such an event?

Reflecting afterwards, you could look at this as a scale of engagement action, ranging from minimal effort (1) on behalf of the organisers to maximal effort (4):

How to do this? There are so many ways the methods are evolving. In fact this topic is huge. I am very glad Alex mentioned it and I look forward to being in conversation with more people on this very soon. It will be a core element to London Creative Labs. (So if this is your domain or you would like to explore more with me, please do get in touch!)

A big thanks meanwhile to the hosts and the organisers for their very fresh initiative. I hope that this event repeats or morphs into the next exciting iteration.